Wanting More Women In Politics? Then Harassment of All Women Needs To Be Challenged.

Many people know the work that WFI do that is in the public eye but much of our work goes on behind the scenes.  That can make it more difficult for people to know what we are doing and why.  So this is part of an occasional series of blogs to look a bit further at WFI work and our reasons for doing what we do. 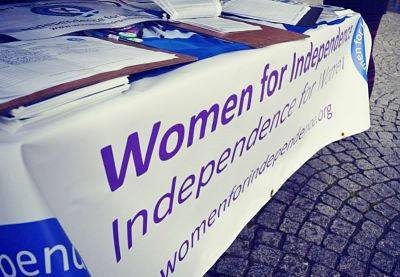 Women for Independence work to increase women's participation in public life.  We help women to recognise and develop their skills and talents.  We look at how and where women are disadvantaged through their gender and we work to make it change.

Turning to politics specifically, everyone is aware that there is a gap in participation by women compared to men, whether that is as volunteers or in becoming elected representatives.  Women face so many barriers to participate in our male-dominated system including their caring responsibilities, biased selection and participation processes and the general misogyny they face for being a woman active in politics.

There is nothing wrong with women. Our message to all women is -

“You have a right and reason to be there and WFI have your back.”

There are some ways that might seem obvious for WFI to help such as giving women opportunities and training to increase their confidence to speak in public.  This is not only so they can be a speaker at an event but to feel confident about raising points in a Q and A or discussion.  Women often tell us that WFI was the group that gave them the opportunity to realise that they could speak and that their voice mattered.

Sometimes it is about WFI speaking out as a group about practices that make life more difficult for women.  We can see how women are targeted by the Tory government at Westminster.  A government that has weaponised their budgets against women with the introduction of the family cap and rape clause, single payments for Universal Credit, cutting public services etc.  Poverty cements inequality as you have fewer resources of your own to call on.  When you are reliant on what the state provides (whether directly or through funding to charities etc to provide services) then your options and opportunities are very limited.  Clearly this makes it more difficult to participate fully in society and have your voice heard and to be respected as an equal participant.  Poverty affects women more than men so this is an area where your gender has a huge impact and knock on effect on your life and opportunities.

WFI will highlight any government, any local council and any political party that targets women in this way.  We are non-party political so we are not compromised in our work to support women's equality in the way that party allegiances could bring.  Of course we are pleased also to support policies that help remove inequality brought forward by political parties, councils and governments but again it does not mean that we wish to be part of a specific political party.

We listen to women who are involved in politics and those who would like to be more involved.  A constant theme is that women do not feel safe.  That is no surprise because often we are not safe in our homes or in our public places.  Women and girls from the youngest ages have modified our behaviours to reduce our risks - we cross the street to avoid a crowd of threatening men, we avoid eye contact, we monitor what we wear, where we go, when we go and with whom.

One facet of the violence and abuse that women experience is street harassment.  WFI campaign to make security a key issue so that women can enjoy their human right to safety and to participate fully in society.   Much of political participation happens in public spaces such as during elections, referenda or as elected representatives. 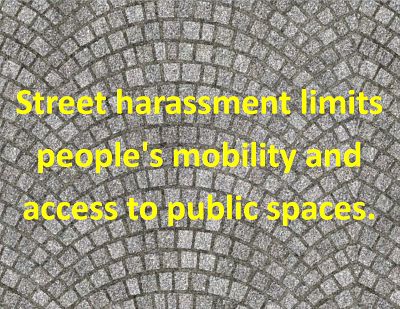 Street harassment limits people's mobility and access to public spaces.  It is a form of gender violence and it's a human rights violation.  In practical terms for women in politics, harassment can limit their opportunity to feel safe campaigning and is one of the top reasons that women give us for not campaigning publically, stating that they do not have any idea of who or what they might face.

Plenty of women involved in politics attest to the difficult situations they have faced.  That worry and holding back from campaigning in public places can seriously impinge on women’s chances of becoming an elected politician.  The emphasis is on women “to deal with it” if they want to become a politician rather than supporting women and challenging the behaviour that interferes with women’s human rights.  It’s important to have women at the decision making tables so we need to support women to be free to participate safely.

Doubly difficult is that street harassment is often dismissed as being a minor annoyance, "banter" or the fault of the harassed person rather than asking why the person doing the harassing is not challenged on their behaviour.  Normally people who want your attention ask civilly if they can speak to you and then conduct themselves in a polite manner.  Women do not have difficulty in telling the difference between someone approaching them politely and other potentially difficult behaviour.  They are not stupid.  They should be able to expect civil behaviour.

We know this is a problem that concerns all the political parties because every party has women in it.  We need only think of Jo Cox to see how violence played so tragically into the political world but there are also many examples of violence that did not end in murder.  Who can tell which will and which will not end in a death though?

There are no quick fixes sadly because all those who think street harassment is acceptable can pull up something on YouTube or a social media comment normalising this behaviour.  Usually they deliberately select an example of something similar said about someone from an opposing view point to “explain” away why it is acceptable.  All these people normalising and endorsing each other’s violence.

A quick check on social media and we see these comments when you put the names of three leading women politicians in Scotland and the word "punch".

“Wish someone would punch Ruth Davidson right between the eyes! Cow”

“Don't ya just wanna punch Nicola Sturgeon in the teeth”

Using the examples above, if someone follows or shouts at Nicola Sturgeon, Kezia Dugdale or Ruth Davidson whilst they are walking along the road for example, how can any of these women possibly tell that the person following them is not the person who posted comments of violence on social media and wants to punch them?

It is not hilarious or acceptable to threaten or psychologically abuse women and no one is a hero for scaring women.

Some threats made to these three women are far more life threatening than a threat to “punch” them.  Why should any woman dismiss threatening comments? If someone punched them, what would you think if they said in response -

“I thought everything on social media was just banter.”

“Women deserve to be punched when someone doesn’t agree with them.”

You would probably not think too much of their judgement if they made these comments, even if you had supported them in the past. Yet, those comments are what women hear on a daily basis so why should anyone be surprised that these women (and all other women) feel the need to modify how they approach and interact with anyone who might pose a potential threat?

Wherever WFI see these human rights violations happen, we work to highlight why it is unacceptable and work to change it.  We are backed in this by women and men across the political world - local campaigners, senior party members and non party political figures. We will continue to campaign until these violations stop.