Women in Hebron : Existence is Resistance

Strathearn Women for Indy raised over £400 for the Women in Hebron co-operative by taking part in the SimplyHealth Great Women’s 10k in Glasgow in 2018.  Two of Strathearn WFI's members, Paula Harris and Keira Gibson pictured below with Nawal Slemiah, visited Hebron, Palestine in the summer. Keira writes here about the Women in Hebron and their experiences. 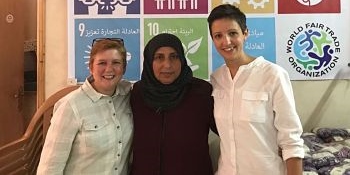 “They told me I was crazy – it would never work.”

We are in Idna, about 10km southwest of Hebron in Palestine. We are here to meet. Nawal Slemiah, founder of the Women in Hebron co-operative.

“For three years I worked on my own. I did everything – the design, the embroidery and the marketing.” Nawal speaks near perfect English in a voice which is quiet and understated yet carries a great deal of strength. She continues, “I had my children and I was stuck at home and needed something to occupy my mind.” In order to keep her mind busy Nawal decided to take up embroidery.

Traditional handicrafts are important in Palestine as a way of strengthening community by keeping a sense of identity alive, honouring the role of women and crucially, as a way to show sumud (steadfastness) in the face of the illegal Israeli occupation. During our time in Palestine many people tell us that ‘existence is resistance’ and for Nawal embroidery became her way of resisting.

Nawal’s hobby quickly developed into more – she had a dream to open a shop and start a co-operative to help empower other women in Idna and Hebron. “Even my husband told me I was crazy,” she laughs. This was in 2005, and here we are now in 2018 sitting in the co-operative community centre which currently provides training and employment to 150 women from Idna and the surrounding villages. All of the women receive a guaranteed minimum wage and it is a daily struggle for the co-operative to generate enough income to pay everyone.

Nawal is proud to tell us that Women in Hebron has recently achieved Fairtrade certification which means the women can attach the Fairtrade Mark to their products. Nawal hopes this will boost sales as times are hard in the old city of Hebron where the Women in Hebron shop is. Hebron is the largest city in the West Bank and the old market used to be a bustling, vibrant place.

These days Hebron is a complex and divided city – under the Hebron Agreement signed by Israel and the Palestinian Authority (PA) the city was split into areas H1 and H2. The PA controls civilian and security matters in H1, however Israel retains control over security in H2. Right in the centre of Hebron (H2) there are now roughly 500-800 illegal Israeli settlers and over 2,000 Israeli soldiers who have set up no less than 20 checkpoints making movement extremely difficult. Much of the area is now deserted and is known as ‘Ghost Town’ as Palestinians have been forced to close their shops and leave in order to escape the daily conflict and humiliation of negotiating the checkpoints. 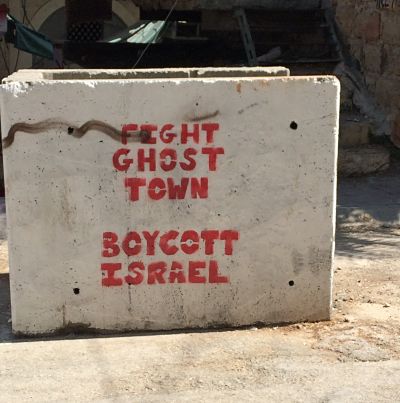 During our visit to H2 in 2016 we went through a checkpoint - which our Palestinian tour guide was not allowed to go through - and we found it to be a stressful and intimidating experience, yet this is what young children have to endure to get to and from school each day. Moreover, the children often face threats and intimidation on their way to school from the illegal settlers. There are a number of international volunteers in Hebron who chaperone the children and document incidents as they occur. In our time in H2 we also witnessed where rubbish and waste had been thrown down on to the market place by the settlers who have moved in to the houses above. The Palestinians have put up netting (photo below) however various liquids, including urine, are frequently poured down ruining the stock below. 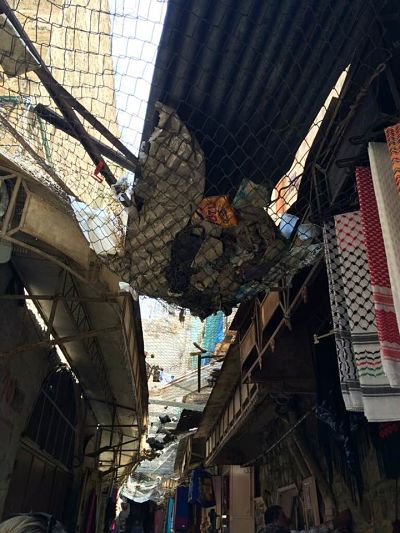 The Women in Hebron shop in the old souk is where we first met Leila Hassan in 2016. She invited us to sit with her and gave us sweet Palestinian tea and figs. We felt the tension as a group of illegal settlers walked through the narrow souk surrounded by heavily-armed Israeli soldiers – directly contravening a recent agreement between the Palestinians and Israelis.

Nawal tells us that Leila is still the only woman running a shop in the souk. I ask Nawal how business has been since we visited in 2016 and she shakes her head, “I told Leila to leave the shop and come and meet us here today but she won’t come. She won’t leave in case she misses even one customer!”.

There is a knock on the door, someone has brought food. We sit at a small table with Nawal and some of the other women from the co-operative and eat chicken and rice with labneh (a kind of yoghurt). After lunch Nawal gives us a tour of the co-operative. There is a large central room where we had been sitting which also has space on the floor for an old-fashioned, complicated-looking loom. This is where the women make the colourful rugs that they sell on their website. Nawal explains that this is very difficult work for the women as they have to sit on the floor and lean over the loom. Recently, whilst doing research, Nawal discovered looms that could be attached to the wall, “They are expensive, but they would stop the women from hurting their backs,” she says. 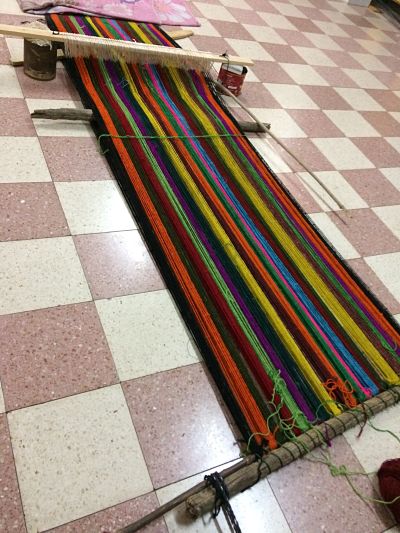 Off the central room there are four more rooms – a basic kitchen, a stock room, a room filled with about 10 sewing machines of various ages and in varying conditions. We enter this room and see a woman sitting using one of the machines. We had taken Nawal some tartan fabric from Scotland as a gift, “She is making you something,” Nawal smiles as we leave the woman working busily at the sewing machine. 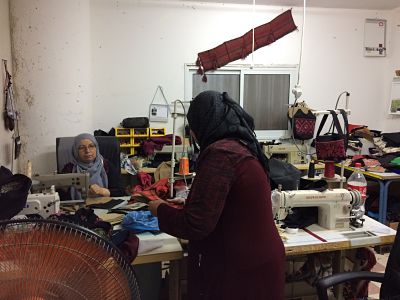 The stock room is full off brightly-coloured pencil cases, cushion covers, handbags and purses. Nawal shows us some new designs that the women have been working on in the hope of breaking into the UK market. The designs are intended to suit Western tastes but the embroidery patterns themselves are Palestinian and each pattern has a specific meaning or story attached to it. A pattern might represent the village where the woman who made the item is from, for example, or represent themes such as hope, prosperity or good health.

As we cross the central room towards the nursery, Nawal explains that many of the women have to bring their children to work, “In the past the children would be running around, pulling thread off the machines, playing with the materials but now we have this,” Nawal gestures towards a space filled with books, toys and colourful posters. “Now it is much better!”, she laughs.

The nursery was funded by Polish Aid who have been working with the co-operative by providing two grants to strengthen their organisational capacity and to increase access to local and international markets. Increased access to international markets is vital to Women in Hebron. Nawal is visiting the UK in October this year to promote their products. We will be organising two events – one in Glasgow and one in Crieff* - where Nawal will be speaking about life in Palestine and selling Women in Hebron products. She is also keen to attract retailers from Scotland who could stock Women in Hebron products.

In the heat of the Women’s Co-operative, we sit back down at the table to have a cup of mint tea with some of the other women. As we are finishing, three international volunteers enter the room and introduce themselves. “Are you the leader of Women in Hebron?” one of them asks Nawal. Nawal gestures towards every woman at the table and says in her quiet yet defiant way, “No, we are all the leaders.” 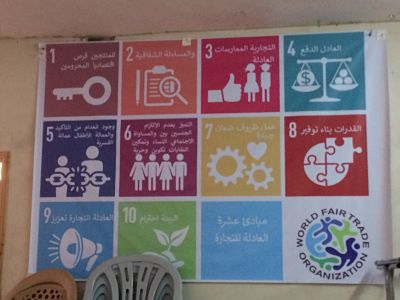 As we travel back to Hebron and then onwards to Bethlehem we reflect on our visit. Nawal has succeeded in creating a Fair Trade/fair pay co-operative which allows women in an extremely conservative society to earn money and gain independence whilst retaining an important part of Palestinian heritage. She has had to battle against the expectations of her own community as well as the illegal Israeli occupation and her battle continues every day. There is no doubt that Nawal is an inspiration and we look forward to welcoming her to Scotland in October.

*The Crieff talk has been provisionally booked for Wednesday 17th October and the Glasgow event on Thursday 18th October. Further details will be available nearer the time.