Julie Bell from our National Committee organised a democracy event in Angus.  The results were fascinating.  Read on to find out more.

You might think that Kirriemuir is a sleepy little Angus town, made famous by its connection to JM Barrie, being his birthplace, and to Bon Scott, whose short time living here is commemorated annually by Bonfest, a veritable smorgasbord of AC/DC tribute acts.

Two of those things are true. Kirriemuir is far from sleepy. I like to think it’s a hotbed of sedition and revolution. This blog describes a process, in collaboration with Willie Sullivan, Director of the Electoral Reform Society Scotland, which helped us to look at modernising local democracy for the 21st century.

A bit of background

The Yes Kirriemuir campaign, prior to IndyRef1, was a lively affair. The No result fired me up. Since joining the SNP in 2014, I am now the convener of the Kirriemuir & Dean branch, which has its lively moments, and we have made some effort to reach out to all parts of the community through folk nights and, notably, a very well-attended land reform event with Andy Wightman before he came an MSP. We’re very inclusive.

Building on that, in October 2016, we hosted an event in our town, ‘Local Democracy – what does a modern Scotland deserve?’.

It sparked quite a discussion and people were keen to follow up. Which was great, because on asking Willie Sullivan to participate, he asked me if our branch would be willing to host a consultation event as part of the ERSS’s campaign, ‘Act as if we own the place’, the title of which was the brainchild of Lesley Riddoch. Of course, we said yes.

Willie and I then met, post-October event, to firm up the format and timings and, on the day, it worked really well. It was designed to make sure voices were heard, by creating small, facilitated discussion groups.

That event took place on Saturday January 14 2017. A couple of my WFI national committee chums, Maggie Lennon and Rosemary Hunter, volunteered to help out as facilitators, as did Montrose Cllr Bill Duff, another SNP member, Gill Stranock, a Green Party chum from Common Weal Angus, Gavin McColl, and Lorna Stevenson from Common Weal Angus. We had pots of stovies and loads of cakes.

The sitting Tory councillor and two compadres joined in too. We were nothing if not eclectic.

The following comprises elements of the flipchart write-ups from the event and my own perspectives. Thanks to Willie for the scribefest. 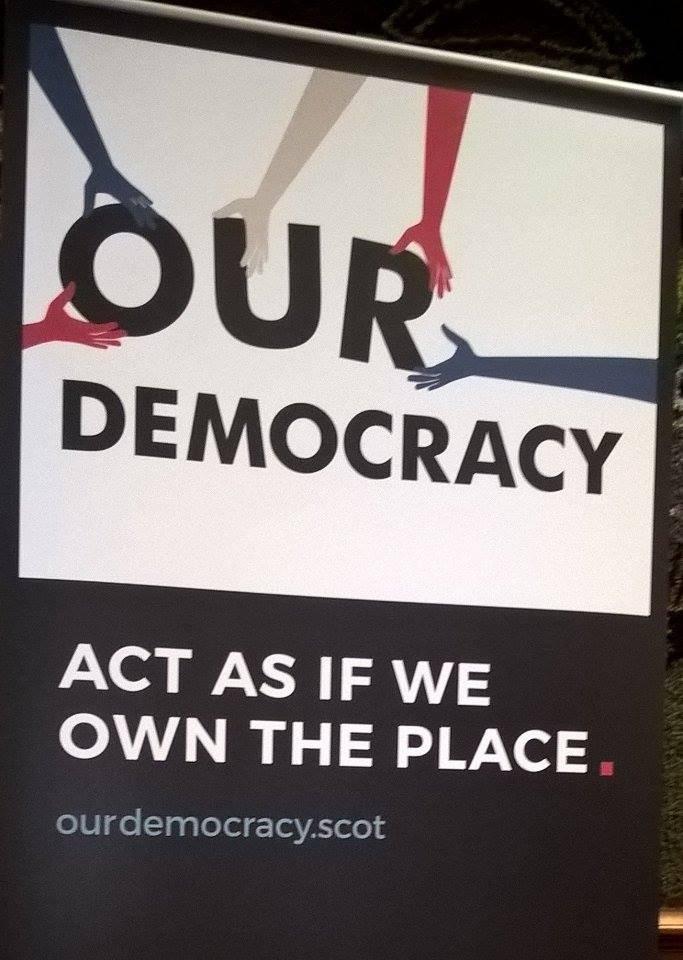 The ‘Our Democracy’ Campaign – The Kirriemuir Event January 14 2017

‘Our Democracy’ is a coalition of agencies and campaigners determined to make Scotland’s local democracy work better.  The campaign is based on a simple principle that people flourish when they have most control over their lives. The question arises whether current cultures and systems of local democracy act to encourage or to limit this?   The main activity of the campaign is to organise ‘Act as if Councils’ around Scotland. The ‘Act as if Councils’ are local self-selecting deliberative forums organised in partnership with a broad range of different partners where people can discuss and imagine what it would be like to run their place, what they might do.

The Place and the Process

Kirriemuir is a small town in central Angus with a population of around 6000. It is part of one council ward, ‘Kirriemuir and Dean’, of Angus Council, represented by 3 elected councillors, which extends into a number of villages and the Angus glens, a much more remote and rural component of the ward. 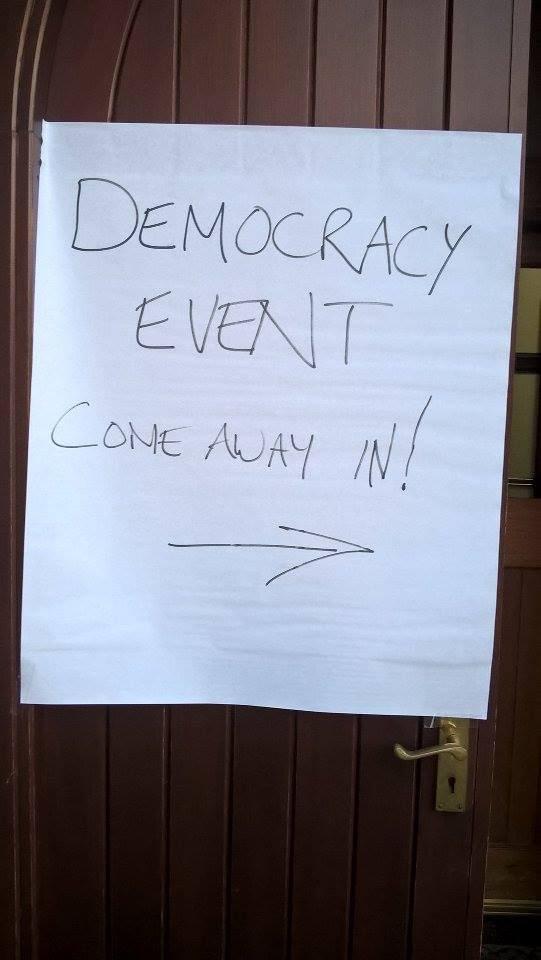 ‘Our democracy’  worked with local partners Kirriemuir and Dean SNP branch in organising the event but it was always clear that the event should be open to people of all parties and none. In attendance on the day there were councillors and members from other parties as well as non-party citizens. People from other Angus towns attended too – Forfar, Carnoustie, Arbroath and Montrose. Ages ranged from 18-late 70s.

The event was divided into three main sections.

Step one was to create a safe space contract and it wasn’t long before the stipulated ‘FUN’ was audible around the room. From our perspective, it really helped to have facilitators not necessarily from the town and it also helped draw in other expertise. 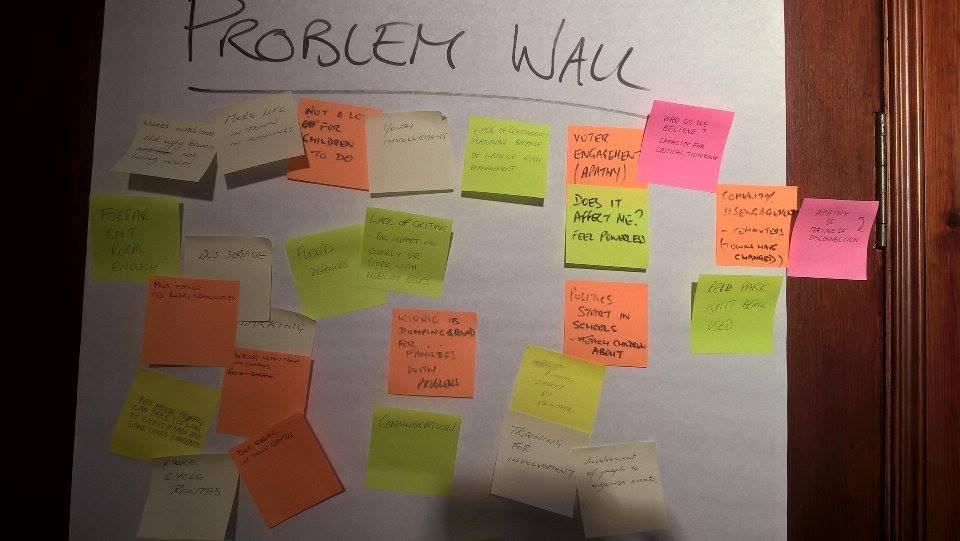 The groups were asked to identify the key problems in their communities, then prioritise them.  They came out as:

Bearing in mind the October event had started some thinking in the minds of some participants already, the Learning Phase consisted of short contributions from ‘witnesses’. In our case, Willie contributed key information (a recap for some people) about how Norwegian local government is structured and funded in a smaller, more local way, with greater levels of engagement and, it was argued, greater success. 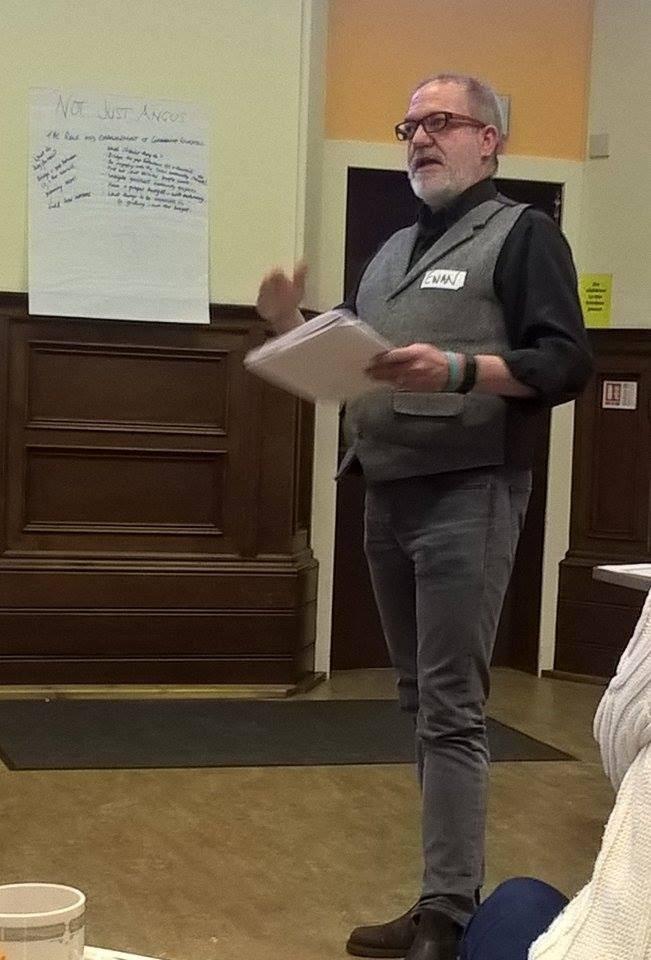 Following on from Willie, Ewan Aitken, one of the COSLA commissioners involved in the report ‘Strengthening local democracy’, fed back some key points from their findings, including:

Unfortunately, a scheduled contributor around local examples of community empowerment was unable to attend due to work commitments, - however, there were enough people in the room who were aware of these developments and we were able to talk to them with sufficient knowledge and understanding.

How to allow local people to take control?

This is bringing together of the themes from the four separate group discussions. Highlighting the dominant themes but also specific ideas for change /intervention as they arose. 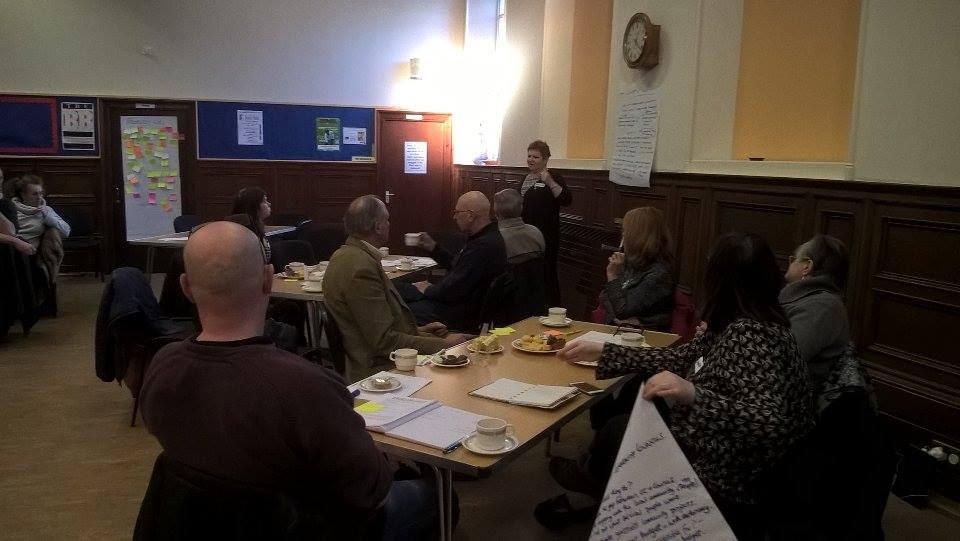 People felt that more empowerment or creation of a more local unit of decision-making /democracy was needed. This would require to have inbuilt engagement mechanisms which go beyond the old model and cultures of representation. Rather than to do stuff for or to people, they would have an important role in instigating and/or supporting grassroots community projects as a means to deliver services and tackle problems. They would be autonomous – sovereign - in their area with a budget that would allow them to fulfil the appropriate functions. That is not to exclude a larger, county-type level of authority that would be responsible not up to the central state but down the way to the small local councils. So - a move away from hierarchy to real community decision-making.

A more specific suggestion was a ‘hub’ model: a central hub at Angus level where resources and support could be pooled and shared by local hubs, again perhaps supporting a range of local community activity and organisation.

We should all invest resources into developing active citizens.  Community group and political groups have started to do this building on the democratic awakening of the independence referendum.   We should not overestimate the time or energy that citizens have available to them to be involved but even a small percentage of the population is a massive resource and in knowledge, experience, work hours and creativity.

So how to encourage this rather than wear it down with barriers and disappointment?

By taking a nurturing and mentoring approach.  Lots of small scale successes of projects to begin with building confidence of people with the aim of growing the scale of community led activity. One such confidence-building project which was suggested was a community café – building on Café Eck’s? 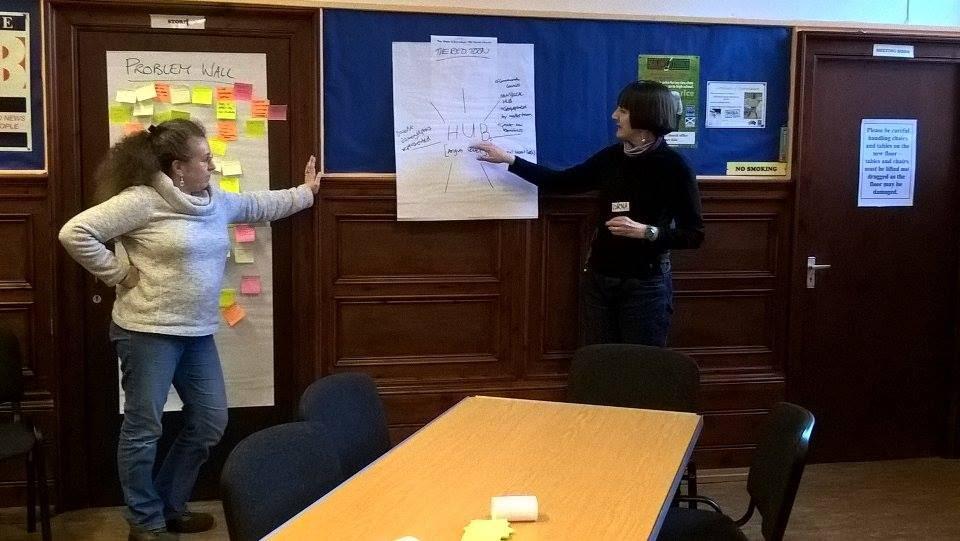 It might be good to try a few different things in different places and to take a proper comparative look at structures and cultures elsewhere.  Think big!  So culture change should not be seen as ‘too difficult’ and while not the same as structure, structure and culture are connected. Hierarchical structures created cultures of ‘top down’ power.

Principles of inclusivity and equality should be imbedded with a clear objective of tackling the feelings of powerlessness in communities as a direct cause of inequality, disengagement and isolation.

Once everyone involved has had a chance to view /amend/agree the report it will be used to inform any submission to the Scottish Governments ‘Decentralisation Bill’ consolation process. Our Democracy will combine these ideas with the many others that are coming out of events like this around Scotland. 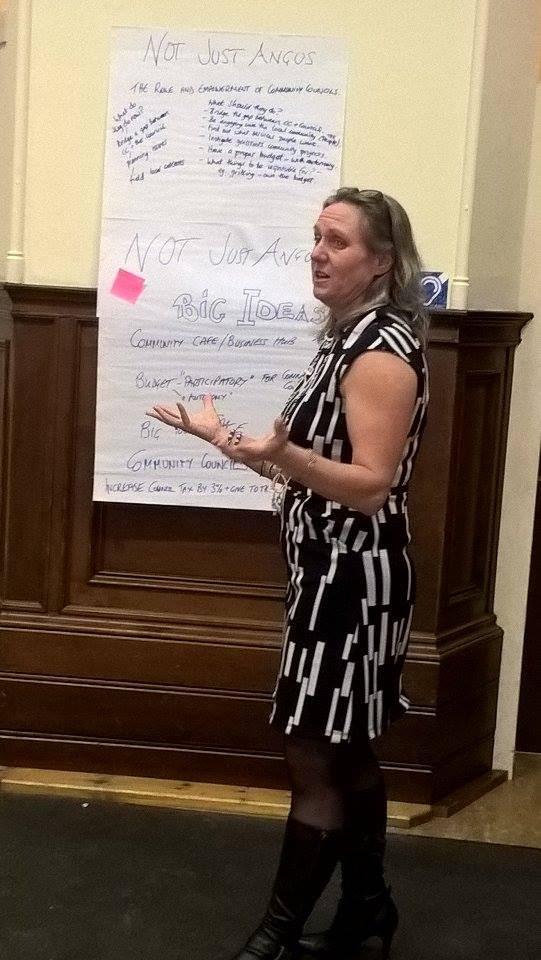 The group might wish to seek meeting with various officers of the council and or government to share their findings.

‘Our Democracy’  and Electoral Reform Society will hold a national ‘Act as if…’ gathering for everyone involved in the local ‘Act as if…’ councils at the end of the summer. This will be to share experiences /ideas and to plan for what next. We intend to bring international experience to the discussions.

And finally (but far from it!)

What I loved about the day was the ability of all participants to work together, share, discuss, listen and come to consensus about potential solutions. Such was the buzz about the day and the feedback from it, my colleagues in Women For Independence are keen to support a number of women-only events, taking a specifically gendered view of reforming local democracy to make engagement more effective and inclusive for women – given that women are 52% of the Scottish population, that is not adequately reflected in the number of women elected representatives in local authorities across Scotland.

WFI Stirling is hosting one on April 23 – watch this space!

If you want to find out more about the ‘Our Democracy’ campaign, go to ourdemocracy.scot