Our National Committee member Suzanne McLaughlin who is a personal friend of Gillian Martin MSP, writes about the events around Gillian not being appointed as a Scottish government minister in June 2018.  This opinion piece first appeared in The National and can be read on their website too.

I think it says a lot about Gillian Martin that her first instinct, after discovering she was not going to be made a minister after all, was to be worried about the impact this may have on other women considering entering the political arena.

She’s got a point. To think that words she wrote on a blog 11 years ago, something that she wouldn’t say now, could be dug up not just during her candidacy twice but then regurgitated just as she was about to enter government, in a successful attempt to demonise and humiliate this woman.

These words were taken completely out of context, and from a time when Little Britain was prime-time viewing. To think that these words should be used to destroy a career that was for many of us inspiring. Many of us on the original Women For Independence National Committee looked at Gillian’s trajectory and thought, “I can do it too.”

Gillian lived a life before entering politics that was filled with support for others, and she is one of the women who continually pull other women up behind her. The fact that her very first words to me about this sorry affair were regret about the impact on the potential awakening of other woman hoping to enter politics is typical of her compassion and sisterhood.

The sheer brutality and unfairness of this is something that I would like to address, because if anything is to come out of this then I would like it to be a reflection by Jackson Carlaw and his ilk, that they have got this wrong. They have got my principled, inclusive, kind and dynamic friend completely wrong.

I read Gillian’s blog The Miss M Missives for years, long before she entered politics. Gillian is a natural storyteller: she travelled, she observed, she told tales and wrote stories, and she wrote affectionately, sometimes satirically, sometimes acerbically, but always hilariously about the life she lived and witnessed.

She was, is and always will be, authentic. She’s not a cookie-cutter career politician, and she would often dig into her past and reflect on the eejit that was 20-year-old Gillian, saying sometimes that if she met her 20-year-old self today she would have words with her.

An example of this is the part of her blog that Jackson Carlaw selectively used in FMQs last week, effectively putting the final nail in the career of Gillian Martin. In this particular blog Gillian wrote of her experience in the deep south and gritty New Orleans tourist trap bars where professional bar tenders taught her the ropes.

One such eye-opening revelation was how to spot a “tipper”. Gillian related that list almost verbatim, irreverently telling the story of herself - a young, blonde, shy Scottish student waitress - being taught the ropes by hard-nosed young cool black dudes from the heart of the big easy.

What was a tale about a stranger in a strange land has become part of the destruction of one of the most inclusive women I’ve ever met. How many of us could, hand on heart, put up their hands and say that they have never ever said, written or done anything that they would think twice about now, years later? More so, how horrific would it be to have those words read back years later in front of the whole country and used to remove you from your job? Anyone’s hand still up? No, I didn’t think so.

Let’s go to the other circulated blog post – one, might I add, that Stonewall accepted an unreserved apology for three years ago and once again accepted an apology for on Thursday.

Anyone who has actually read this blog would know that Gillian was not attacking transgender people, far from it. She was attacking the PR machine of her former college, the same PR machine that was data-mining the student body in an attempt to make themselves appear more diverse, in a way calculated to attract more funding and not for the sake of the students, who felt angry at the "tokenistic" behaviour displayed by the college. She was reflecting the frustrations of staff and students.

Was she cynical? Yes. Did she use language inappropriate in 2018? Yes (and she has readily apologised for this repeatedly). Is she a transphobic or a racist? No. Is it fair to destroy a woman because of decade-old language in a satirical blog long since apologised for? I’ll let you decide.

The voters of Aberdeenshire East knew about the blog and elected her anyway (with a sizeable majority). It has been heartbreaking to see the political Twitterati and opposition politicians gleefully tearing her apart. I wonder do they know, these people, that it’s because of the work of Gillian Martin that our children and grandchildren and nieces and nephews are safer on school buses?

Do they know that Gillian is the key person responsible for making sure that girls in your street can get their education when family finances can't stretch to sanitary products?

Do they know that Gillian is a huge part of the reason that new mums have maternity towels in baby boxes, preventing infection, lowering antibiotic use and ending stigma? 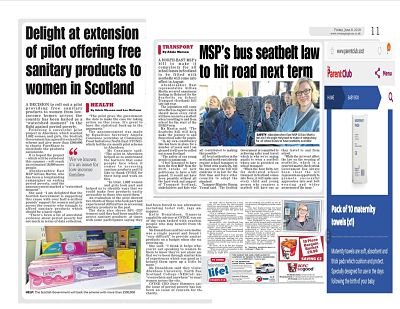 I wonder if they have ever stopped to consider that her actions speak a lot louder than her 11-year-old words.

For those who think that what happened to Gillian Martin at FMQs on Thursday was her being brought down bang to rights, I have this to ask. Are you so sure that you didn’t just let one of the really great ones go?