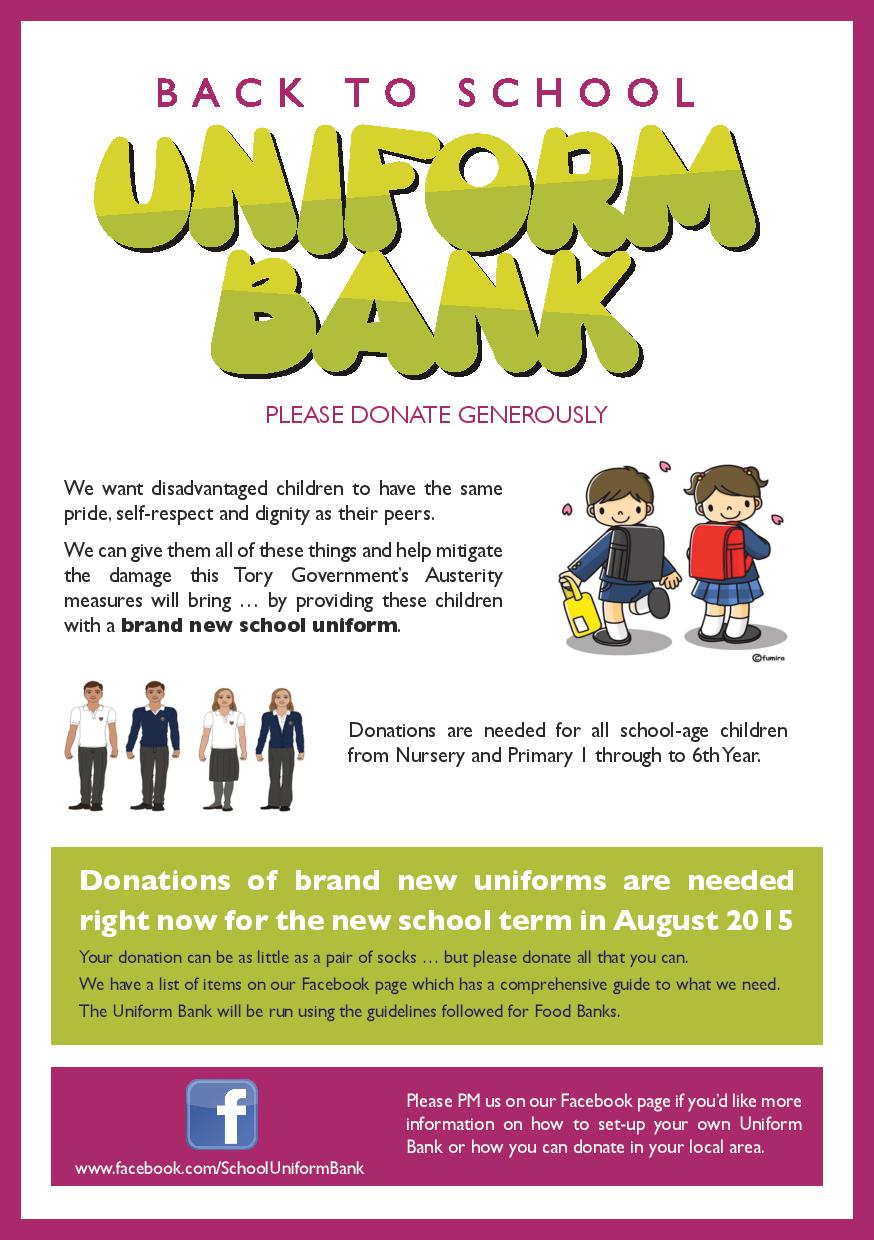 East Renfrewshire Women for Independence Member Sandra Douglas is part of a new, practical campaign to help families in poverty.  Read more to find out what motivated her, and how you can get involved.

Last Christmas, there were many wonderful initiatives gathering pace all over the country, to collect Christmas presents to hand over to seriously hard pressed families and their children. My daughter’s a school teacher and she and I went out on one of those ‘Christmas Shopping’ trips. However, in amongst her list she had a range of school clothing … a jacket, trousers, shirts and blouses, tights and underwear. This is what some of these children would open on Christmas morning, a school uniform! It was wonderful that we were able to provide this but the thought of it as a Christmas present was heartbreaking.

I couldn’t get this out of my head and as I had been involved in a recent Food Bank event the thought crossed my mind that we could run something very similar … but instead of asking for food contributions, we could ask for brand new items of school clothing.

There are several organisations who offer good quality second hand clothing and uniforms but the very essence of this idea is different but simple; to raise and maintain self-esteem, pride, self-respect and dignity in disadvantaged children, by providing a brand new uniform … just like everyone else has.

Our aim is to provide new uniforms to schoolchildren from Primary 1 to 6th Year and operating in the same way that Food Banks are managed, in that uniforms will be provided on a referral basis. The idea, initially, is that each group works with institutions such as school clusters, Women’s Aid, Citizens Advice and similar bodies within their area, who can contact the group when they recognise that a family needs help with school uniform or part of a school uniform.

We held our first event at the Anti-Austerity Rally in Glasgow in June where we got an amazing response. We collected two full suitcases of brand new uniform clothing and received enough in donations and Tombola contributions to fill another two!

Others, individuals and groups, interested in starting up something similar, have already got in touch from around the country. We can be contacted through our Facebook Page https://www.facebook.com/SchoolUniformBank All the information needed to set up a group, or to propose a referral, can be found there and we can be contacted privately through PM and email. We can also provide generic artwork for Back to School Bank leaflets and banners, to help get everyone started. We will shortly be launching our website which will be more comprehensive and will be an interactive platform for all of the Back to School Uniform groups to share ideas, resources and information. We run an Amazon Wish List and have set up an Indiegogo site which provides donations for direct referrals and those who are not running a separate Back to School Uniform group.

We’re new and we’re developing this as we go along and we’re sure to hit some hurdles along the way. But until this era of austerity is over, we need to do all we can to mitigate the effects of the cuts on those who can least afford it. The main aim, however, is to give children … and their families self-respect and hope.