Paisley WFI member Anne Scriven wrote about her experience of becoming involved with Women for Independence and claiming her narrative in Laldy! West of Scotland Literary Journal (Issue 1, Spring 2018) and we are delighted to reproduce her work with kind permission of Clochoderick Press 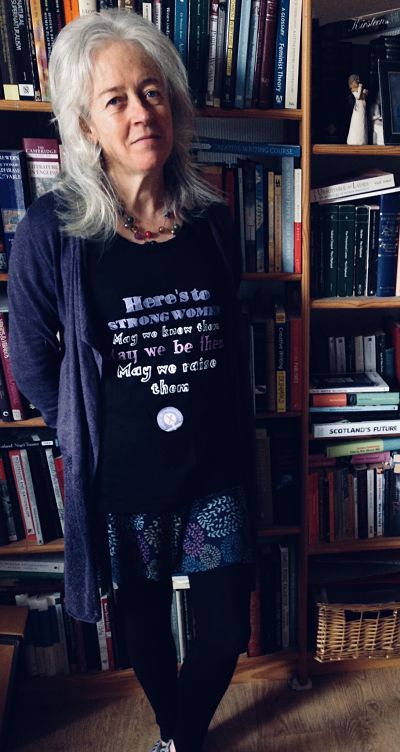 Some years ago an enlightened friend asked me ‘What is it about yourself that you believe to be true?’ It was a question that had me stumped for a while. Surely I was, like everyone else, a distinctive collation of facets, a mix of inheritance, upbringing, culture and genes? Yes, I showed different sides of myself depending on where I was or who I was speaking with, but essentially I was just me. A me who went through life operating out of a strange fluid fixity — if you will allow the oxymoron. A set of givens which were my filter, my sounding board, my perspective on all that life presented. My friend’s question was therefore rather unsettling. In particular, what did she mean by the words ‘you believe’? I had the strange sensation of my whole mindset suddenly being on a shoogly peg. What I had thought certain, set, swirling in my very veins and laid down in my psyche, was, by reason of her question, capable of change. Capable of change if I wanted it to change. It was quite a thought to get to grips with.

I began to think about it. If truth be told, am still thinking about it. For what my friend was really talking about was what I now understand as the power of narrative. Of story. A recognition that we have been told stories about ourselves, we have taken on and stored such stories, stories which have shaped us and which have told us who we are and how we relate to the people around us and the planet we walk on. They are therefore immensely powerful. The trick, I came to see, was to see them as stories. To take our distance — just as we did in our school playground, arms stretched out onto the shoulders of the pupil in front, the line extending back and back as we reordered ourselves from a bunched up mass into a well proportioned line, giggling as we did so. To take distance is to take charge. To step back, see the narrative as narrative. Story as story. Thus see its perimeters, its curves and depths, its persuasions, its possibilities and its limitedness.

Writers know about story. They know it is a construction. They know it is, and can never be, total truth. How can marks on a page reflect the whole of lived reality? It can attempt to express the whole but can never do so. We need the help of imagination, of memory, of our senses to fill in some of the gaps. And we need our intellect, our experience and our dreams to notice where stories fall short. To notice ourselves noticing stories and seeing where they are worn, dated, clichéd, and where we need to write a new and a better one.

George Monbiot — the environmental and political activist, rapidly becoming the man of the moment with his book Out of the Wreckage: A New Politics for an Age of Crisis (Verso, 2017), gets the importance of story. Gets that the world runs on story, gets where it either wounds or heals, energises or exhausts, stimulates or deadens, and how important it is that we are aware of this. In Out of the Wreckage he is passionate in his clarion call for a new story that leaves behind the cold tale of neoliberal individualism and self-promotion. A worn tale which does little more than inscribe destruction and selfishness as a norm. Monbiot challenges this bias by asking us to remember that what we are continually told by a bought and controlled media — that we are all just out for ourselves and don’t give a rap about anyone else — is a useless belief, a lie if you will, and we are deeply capable of writing ourselves a better script. A script that speaks of goodness, inclusivity, care and compassion for our life companions and our planet.

Have to say, sorry George, but in post-Referendum Scotland the movement that is Women for Independence, is way ahead of you. We are already doing what you say we should do. After the 2014 Referendum Women For Indy movement flourished. Women, including me, who hadn’t been particularly active said ‘Right. Enough. Time for us to get involved. Us. Us women who are 52% of Scotland’s population. We have a presence and a voice. Time we were heard.’ Paisley Women For Independence reformed and we drafted ourselves a mission statement:

We, at the Paisley branch of Women For Independence / Independence for Women, invite women to join us at this critical moment in working to make Scotland a kinder place, self-educating ourselves on issues local and global, so that we can speak out boldly and surely on what matters most. As a cross-party group, we do politics differently, inclusively, with a positive outlook. 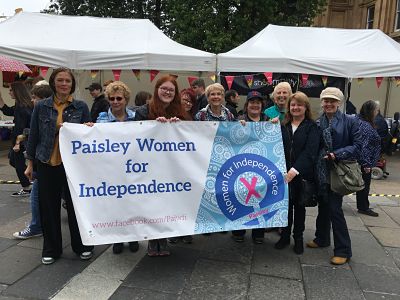 Our statement — our charism (from Latinised Greek meaning a distinctive grace or talent) — re-writes the usual hackneyed list of promised policies by stating what we are actually doing, i.e. sitting in cross-party circles, speaking about that which confuses us, noticing where the lack in society is and what can be done about it, while remembering to laugh and catch hold of the joyous. Doing politics differently because the patriarchal text is utterly boring and we havnae time for it.

None of us are career politicians but are instead a glorious mix of childcare workers, social workers, librarians, academics, writers, musicians, medical doctors, primary and secondary teachers, therapists, artists, administrators, mothers and grandmothers, students, carers, runners, bakers, knitters. We are ordinary women just doing what we can.

We are women of soul — now, there’s a word you don’t come across frequently in mainstream political literature. Women who understand that if we are to make a difference, if Scotland is to move successfully towards writing and enacting a redemptive text, that we need to use that which is not tangible, not paid, not found in a balance sheet, but written on the imagination. For we are daring to imagine another future where women construct the fabric of our days and weave the next chapter. Who do we think we ur? The Queens of Scotland! Crafting a new narrative for a different and better way of being. When Scotland was told in 2014 that we were too small, too vulnerable, too under-prepared, too whatever, to govern ourselves it was a narrative of negativity that won the day. But as Neal Ascherson reminds us in his essay ‘The Genie’s Oot the Bottle’[1] Scotland was never a colony to be bossed around and told what to do. We went into the 1707 Union as an equal partner and yet we have somehow ended up as some kind of dependency asking for permission to run our own affairs. The initial agreed text has been misunderstood, misread. We need to untangle it, re-read it, do some exegesis so to recover the original intent.

Words are everything. This is where writers come in. Writers whose job is to notice and to comment on what they see. And to articulate a good story. Scotland has a bardic past. We are a nation of shenachies — gifted storytellers who are needed to encapsulate significant happenings. We need to aim high. We must not skimp in the effort of stretching for the best words. Words that are of light, of promise, are a manifesto of kindness … here’s a hand my trusty fiere … to step away from narrow narratives that auger a future of fear and instead deeply question if what we have been told about ourselves, is what we want to be true.

[1] Neal Ascherson, ‘The Genie’s Oot the Bottle’, Irish Pages: A Journal of Contemporary Writing, Vol 9, No,1.