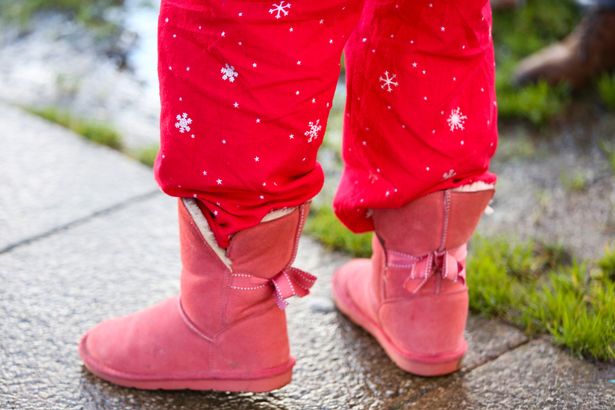 As women are criticised for wearing pyjamas to the school gate, National Committee member Sandra Mills ponders on perfection and motherhood.

During Question Time last week I woke up just in time to hear the last question about mums and pyjamas. They dared the audience members (the females) to admit if they had ever dropped their kids off to school in pyjamas, and one lovely woman was brave enough to raise her hand: all hail the Shameless Mum! She explained that with three children in primary school she was quite grateful to have anything on at all when she got to the school gates, let alone pyjamas. As the audience laughed, I noticed a slightly more mature lady turn to the man beside her and give THAT look. Y’all know the one. The one involving a lot of eyebrow.

In any case, I would never wear pyjamas on the school run. Mostly because I’m usually still dressed from when I fell asleep on the couch the night before.

I imagine that if we lived in a parallel culture that believed in playful and attentive Gods that all had their own purpose, then mothers would probably worship some panel of Expert Mum’s who lived in some beautifully laid out Banqueting Hall and Spa and spent the day watching us all and filling out their grading sheets. One would look like the tall red haired one from Desperate Housewives (pretty much the last TV I watched uninterrupted). The eyebrow raiser from Question Time would fit in nicely.

I’m a mum of two and there’s somewhat of a gap, which makes my perspective rather interesting. I was 42 when I had the youngest, and I was so proud of my last few contractions. I felt like an amazon woman with the last one particularly – I pushed so hard she scooted a full body length along the table before anyone thought to catch her. The pride didn’t last. The cleaner eventually shouted at me to get out of the bed because ‘You’re not supposed to lie about in this room all day, you know’ and I started to cry because I was 42 and I’d just had a baby and I was tired. The cleaner turned her back and studiously ignored me as she shoved all my things along the floor with her mop. Apparently there was no badge on offer.

In any case, I had already noticed when I had my other daughter 20 years previously that there seemed to be a lot of news articles that started with words like “Studies have shown that mothers who…” Now, maybe I just didn’t see the ones about the fathers, but after 25 years I’m pretty sure I’d have run across them if they were there to be read. Usually the studies focus on the things the mothers have probably got wrong, from drinking unset lime green jelly while pregnant, to letting their babies cry, to not letting their babies cry, to going back to work too early….

And it doesn’t stop there. Adverts. See, I want to be the sort of baking-in-a-beautiful-kitchen-while-breastfeeding-lovingly-while-singing-and-making-pleasant-goo-sounds etc etc…that sort of mum. That’s the mum I wanted to see myself as. But while my big girl used to love my singing, my wee one hated it. The kitchen’s usually too messy to bake in. Also, I tried for 3 weeks to breastfeed until sending my husband off to the Asda at 2 in the morning for formula. Which she was allergic to, as it turned out. Which we found out months later after trying every single product on sale in Boots to take the lactose out.  And she didn’t sleep. When I say that, you may think she probably got a few hours at some point during a 24 hour period. But she would sleep for 5 minutes and wake up as though she’d been asleep for hours. Then she’d cry for an hour. Then repeat. Endlessly. For the next two and a half years.

I went back to work after 3 months because my eldest had come home to live, my husband was struggling to stay in Uni, aged 50 and unable to use a computer, and we were flat broke. It was lucky I never turned up to my own school in pyjamas. I did start saying bizarre words out of sequence and forgetting the names of children I’d taught for 5 years. You try teaching what a simile is when you can’t remember the word simile, or what you’re even trying to teach it for.

So what with the not sleeping and the crying and the vomiting (did I mention I had gall-stones that went undiagnosed for the next year because I couldn’t get an appointment with my doctor and kept getting referred to the nurse who kept proscribing antibiotics?) and the baby not sleeping and crying and vomiting, and the husband who kept asking me to type up his 3000 word essays two hours before they were due, and the children at school making fun of me for saying words like “zoodle” by mistake and the damn adverts on the telly trying to convince me that my home was a poisonous nest of germs – I just wasn’t enjoying being a mother too much. But I’d wanted another child so badly that I’d started trying for a baby three months after I met my (now) husband. And I was pretty sure if I admitted to anyone how I was feeling they would tell me something about making beds and lying in them. So when I got to work I plastered on a giant smile and pretended life was Wonderful. I cried in the toilets, in my classroom, in my car to and from work, in bed at night. I won’t tell you where I ended up, but suffice to say it was in a very dark place.

Then a couple of years ago I got a bit of a zinger from the cosmos. I was watching one of those Channel 5 benefit programmes (not by choice and I’ll explain why in a moment) and the mum on benefits who was, of course shiftless, lazy and stoopid, had a toddler the same age as mine. She was explaining, as he rampaged around in the furniture, jumping off the walls and shouting gleefully, that he never went to bed before 3am because he just wouldn’t sleep anyway. And thus he was always late for nursery. I bet she wore her jammies to drop him off, too.

I looked at the camera panning around her living room and it struck me. My living room looked exactly the same. The only reason I was watching the programme in the first place was because the remote was lost under the detritus of the day and I was too tired to look for it. It was there somewhere under the cast off dressing gown, vest and trousers, the day old biscuit wrappers, empty fruit shoot bottles, 3 stray dominoes and the empty domino box, playing cards, torn up CBeebies magazine, DVD wrapper, broken DVD case, 13 soft toys and a naked doll, and a weird lump of something organic that hadn’t been cleaned off the carpet. Although I must say my toddler was, of course, in bed by the sensible time of 8. Well 8.30…ish. And then spent the next two hours running up and down the hallway and jumping in and out of bed, going up and down the stairs with feeble excuses like “The curtain has scared me”.

And I suddenly realised: That’s it! That’s the sort of mum I am! The one from the ‘bad’ telly! (As opposed to the inspirational ‘good’ telly.) I felt a total kinship with this single mother, except she had to cope by herself and I had a team around me.

I sort of embrace that now. The only ‘reality’ I actually got from that programme was that being a mum is bloody difficult and in your mid 40s it’s really bloody difficult. It’s just that we don’t see it, read it, hear it. We hardly ever actually glimpse what real parenthood is actually bloody like. We’re given versions of what it’s supposed to be that can make us feel sad, bad, dangerous and lost most of the time.

So I’m going to stand up now and say it out loud: I’m Sandra. I’m 47, and I’m one of those mums. The ones that only manage to meet half the grading criteria half the time. The other half of the time I’m either asleep, or lying awake in bed worrying. I often turn up to school looking flustered and unkempt. I don’t have a puff of ‘clean’ wafting out my door when I open it, and I’m glad I don’t really like the Queen much, because she definitely wouldn’t be able to use my toilet if she turned up. I’m often late to the school gates, I only wash the ballet uniform every second week and I gave my daughter Cadbury’s chocolate for breakfast last Saturday because we were at my big girl’s flat and that’s all she had to eat.

I think it’s up to us all to start calling the media out on their representation of mothers. It’s a mountain to climb and no mistake, but it only needs to be done a bit at a time. Campaigns like Media Watch and #everydaysexism must be ongoing, and we need as many women as possible to participate in them because the work must be shared in order to make it bearable.

See to be honest, if we feel it necessary to discuss some mums turning up to school in pyjamas on Question Time, and on the news and on the radio, then all I can say is God help us. Because there’s a lot of other really terrible things going on, not the least of which is the very real pain suffered by people of all genders, people with mental disabilities, or just people going through a difficult time, who might be desperately hiding their feelings in public because they’re trying to fool the fucking tutters and eyebrow raisers.